Before Marfeel premium publishers activate the Marfeel CDN package for blazingly fast speed, they might have a few questions.

The following are some of the most common questions Marfeel has fielded from premium partners regarding finer details of a CDN and benefits of the Premium Package Marfeel is offering:

A CDN, or content delivery network, delivers the content from a publisher's website to users in faster and more efficient because it is based on the user's geographic location.

A CDN is made up of a network of servers all over the world called points of presence or POPs. The CDN that is closest to a user is referred to as the edge server. When a user requests content from a website served through a CDN, they're connected to the edge server closest to them. This ensures that the content they are browsing for is served to them the quickest, giving them the best browsing experience possible.

Websites temporarily store (also known as cache) their content on CDNs so that is can be delivered from an edge server much quicker than if it had to be delivered all the way from an origin server. When a user wants to access content from a website or mobile app that uses a CDN to host their content, that user's requests only has to travel to a nearby POP and back, not all the way back to the origin server.

For example, if a user in Portland, Oregan wants to read a site from London, England, and that site uses Fastly as a CDN, that user gets the content from a POP in Seattle instead of the request having to go all the way to the origin server in England and travelling all the way back to Portland.

CDNs also remove and update (also known as purge) content constantly, so that the most up-to-date content is delivered. 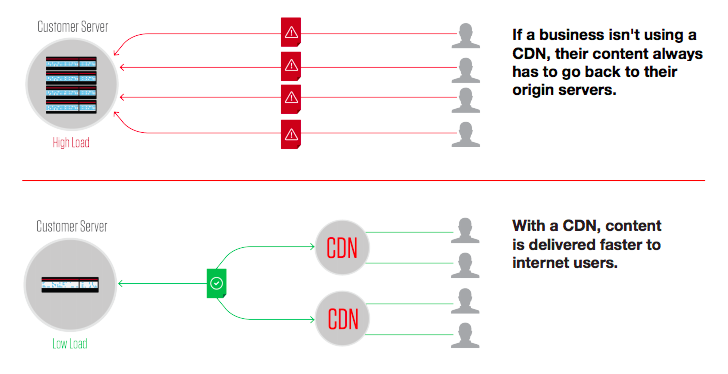 2 - What are the main benefits of activating the Marfeel Premium CDN Package?

a) Server-side device detection is key. What exactly is it?

When a user accesses a website, depending on the device they are using, one version of the site (the desktop version or the mobile version) must be rendered. With the Marfeel Premium CDN Package, devices are detected on the server-side.

This means that the right version to display to the user is executed on the first roundtrip and pushed "down the wire," saving several seconds off loading time and getting Marfeel closer to their goal of 0.7s and avoiding two entire round trips, saving you crucial time before the session starts.

Additionally, moving the activation logic from JavaScript to the server also avoids sending unnecessary and unoptimized assets meant for desktop.

b) How can I measure my current speed?

Speed alone however isn't enough. Marfeel's Premium CDN Package isn't only about downloading the first byte as fast as hell, it's also about delivering a smooth UX and fluid interaction. To ensure that Marfeel delivers the smoothest UX possible, they use Google's Lighthouse test to continually assess themselves, where optimal scores can only be achieved by optimizing JavaScript.

3 - I already have a CDN service hired for my website. Why should I change to the Marfeel Premium CDN Package?

Server-side device detection is one of the main reasons why the Marfeel CDN Premium Package will make you instantly much faster. Being able to detect what version needs to be served to the user on the server-side automatically unblocks a cascade of benefits driven by the improvement in terms of speed. Being faster positions publishers better SEO-wise and will deliver a better UX.

Also, by getting a site that replies faster, your ad performance will also be impacted positively. The Marfeel Premium CDN Package will also get you a PWA just out of the box, and will allow Marfeel to edit the changes on the ads.txt on the Marfeel side, without you doing it manually.

All this will relax your servers and remember, Marfeel is paying for everything – for both the mobile and desktop traffic, so you will be able to save what you were paying for the CDN you may have had before.

4 - Marfeel provides a Premium CDN Package for free. Why?

Marfeel's focus has always been publisher-first. Any change applied will be implemented thinking about the benefit for publishers first.

Due to Marfeel's scale, we are able to negotiate optimal deals with premium services for our publishers. The CDN is a very expensive service that most publishers wouldn't probably contract on their own.

The improvements that Marfeel achieves in terms of speed and SEO will have its return in better monetization for the publisher, so the investment that Marfeel makes here pays off.

5 - By activating the Marfeel Premium CDN Package, are the benefits applied to the mobile site or desktop as well?

The changes are applied at the domain level, so it means both mobile and desktop will be under the Marfeel CDN and receive the benefits it delivers.

6 - Will it have any impact on the design of the website?

No, neither on desktop or mobile. The design will remain exactly the same, with the only difference being that the site will be faster.

7 - I also get HTTPS from my hosting provider. Can Marfeel provide it for me too?

The SSL is managed by Marfeel with Fastly but the origin site must be prepared to support HTTPS (in order to avoid "mixed content errors").

It's ideal if the publisher has their origin over HTTPS and uses a self-generated certificate.

a) I am still under HTTP, is that a problem?

Being under HTTP is not a problem for activating the CDN, but HTTPS has already become an SEO ranking signal by Google, we Marfeel recommends that publishers migrate to HTTPS as soon as they can.

The migration can be done while the Marfeel Premium CDN Package is active, we would just need to coordinate from our end, so we can adjust what is necessary. We at Marfeel can also assist you with this process.

8 - How often will my content be updated if I have the Marfeel Premium CDN Package in place?

Marfeel honors the max-age and cache-control that the publisher sets on their end. If you don’t set any, the HTML assets will be updated once every minute, so we ensure your content is always up to date.

9 - How can I check the impact of the Marfeel Premium CDN Package once the activation is concluded?

The online Google tool testmysite.withgoogle.com will reflect the improvements in terms of speed a few minutes after the activation of the Marfeel Premium CDN Package and once the DNS is propagated.

From Marfeel, we will also monitor your performance and see how the numbers in SEO and performance are evolving.

You can always contact the Marfeel Customer Success team at success@marfeel.com so they can assist you on resolving any issue or concern you might have. If your request is critical, you can mark it as urgent. For more information on escalating urgent requests, see the Escalate Support Requests to Urgent article.